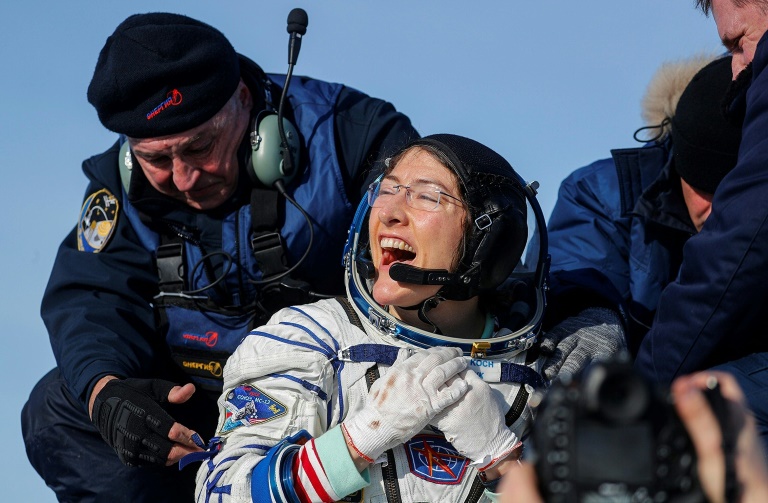 Another Record Made: US Woman Stayed In The International Space Station For The Longest Time

NASA astronaut Christina Koch became the woman who stayed in the international space station for the longest time. She recently reached the earth safely after the space flight for around 11 months in the international space station. She made the record of been there for the largest time as a female astronaut. She touched down the Kazakh steppe at 9:12 pm after 328 days in ISS. Her companions were Luca Parmitano from the European space agency and Alexander Skvortsov from the Russian space agency. When she touched down after her journey in Soyuz descent module operated by Roscosmos space agency she was seated there and smiling after the landing. She was happy with her international space station journey as well as because of her achievement as the longest stay there as a woman.

She went up to there on 14th March 2019 and when and she returned the first one to see her in that capsule landing on the snow-capped place in Kazakh who was the local people on horseback. Christine Koch is a 41-year-old lady who is an engineer by profession and born in Michigan. She was interested in this kind of activity from her childhood and currently, she is going to head the headquarters of NASA in Houston. The previous record of the longest stay in the international space station was of 289 days held by NASA veteran Peggy Whitson in the year 2016. And she is the heroine and mentor of Christian coach and now she wants to inspire the explorers of the next generation.

After the extraction, Koch says that she will eventually miss the microgravity mode a lot. Because she loved the fact that she can bounce in between the ceiling and the floor whenever she wants. Now she is going to go to Houston from the Kazakh city and there will be a medical test for heart in cologne in Germany. This medical test is very much needed for the research of manned mission to Mars which will be done in a few years for a very long duration. So it was indeed a very important factor as the future of science.

This achievement was used by a very famous skincare brand who made their tagline as ‘make space for women’ and telecasted it in American football super bowl during the break time. In their advertisement, they featured the famous astronaut from NASA, Nicole Stott and also promised to donate around 5 lakh US dollars to the non-profit society of women who code. This organization is all about encouraging young women in the world who want to have a career in science and Technology.

In the male category, this record is held by 4 people and the longest duration is 437 days by Russian astronaut, Valery Polyakov. So it is indeed a proud moment for all the women astronauts out there in the world and they will get surely inspired by Christine Koch for their future endeavors.