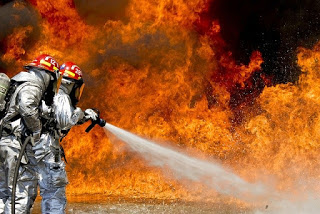 Tughlakabad the police and fire department took out all the slum occupants in time even as most were fast asleep.

A massive fire broke out in the slums of south-east Delhi’s Tughlakabad area on Monday night.

A call was received at 12:50 AM and 28 fire engines were rushed to the spot, a fire department official said.

The police and fire department took out all the slum occupants in time even as most were fast asleep.

The fire was controlled around at 3:40 am, but around 1,500 shanties we’re brunt, leaving hundreds of people homeless. The government is currently assessing the loss.

we received information about a fire at around 1 AM at slums in Tughlakabad. All police staff reached here immediately. it is being said that around 1,000 to 1,200 shanties caught fire, ” Rajendra Prasad Meena, Deputy Commissioner of Police(DCP) south east, told ANI.

Locals are saying most people came out of their shanties after a fire broke. However, it can’t check as it is a big fire, ” he said.

firefighting operation is underway and no casualty had been reported so far.