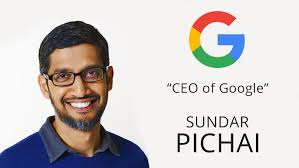 Just when we thought Sunday Pichai he reached the highest point in life the anyone can ever dream of, he touches another milestone. Pichai has been named the new CEO of alphabet inc. google’s parent company.

Cofounders Larry Page and Sergey bring have stepped aside from day-to-day operations of the company and will continue as confounders and members of Alphabets board.  Pichai, who is also a board member, will lead the alphabet alongside his role as CEO of Google and managing alphabet portfolio which includes chronicle, GV, CapitalG, variety loon, X, waymo and googles fiber.

The dream is not that which you see while sleeping it is something that does not let you sleep. while most of us have shared this famous quote by Dr. APJ Abdul kalam on social media platforms a zillion times, only a few such as Sundar Pichai, who also hails from Tamil Nadu like the former India President, seem to have imbibed it and made it happen.

Here’s how Pichai went from a Tamil boy in love with Technology and Engineering to leading the world’s biggest conglomerates.

PICHAI LOVE FOR TECHNOLOGY AS A CHILD

early on, Pichai understood how technology could save a lot of time as he recounted in an interview. when his mother was such once. he had to travel to a very far off place to collect blood report for her. it took him more than an hour to reach the place and he had to wait at the center for four hours. this annoyed him and when the family bought their first rotary telephone, he valued it a lot, since with one phone call he would no when reports would arrive.

He was also intrigued by the refrigerator his family bought.

Pichai joined Google as the president of product management in 2004, he was entrusted initially with a google search toolbar which gave users of internet explorer and firebox easy access to Google search. he also went on to work on many other important products like Google Gears, Gadgets, Google peak, all of which all no longer available.

The thing that attracted me to google and into the internet, in general, is that’s it’s a great equalizer, I’ve always been struck by the fact that Google search worked the same as long as you had access to a computer with connectivity, whether we’re you a rural kid anywhere or a professor at Stanford or Harvard. I want google to strive to do that — not just build technology as an equalizing force, as an enabler for everyone, around the world, ” said pichai.